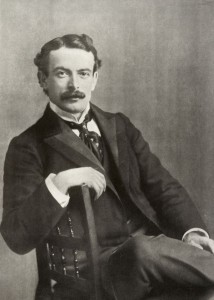 Huw will co-host a glittering dinner in London with TV historian Dan Snow in honour of David Lloyd George, who hailed from Llanystumdwy, in Gwynedd, on Wednesday December 7, a century since the legendary politician became Britain’s Premier, in the darkest days of World War One.

The landmark occasion, in the sumptuous setting of the National Liberal Club and Royal Horseguards in Whitehall, boasts a guest list, including Lord Owen, Lord Hattersley, Lord Steel and Lord Elis-Thomas, along with TV personality Sian Lloyd.

Many of Lloyd George’s family, including the current Earl Lloyd-George, will attend the dinner, where guests will be entertained by North Wales born opera superstar Bryn Terfel.

Also performing will be celebrated Welsh harpist Hannah Stone along with Pwllheli actor Richard Elfyn – who portrayed Lloyd George in a play about his life.

Robert Bourns, President of the Law Society, will also make a speech, looking back at Lloyd George’s career as a solicitor in North Wales.

The Lloyd George Centenary Dinner marks the day in 1916  that Lloyd George was offered the Premiership by King George V.

It follows the launch in January of the £250,000 Lloyd George Premiership Centenary Appeal, which aims to raise much-needed funds to protect the Lloyd George museum.

The museum, designed by Portmeirion creator Sir Clough Williams-Ellis, is in the village of Llanystumdwy, Gwynedd, where Lloyd George  grew up and developed his political views.

Huw, who has backed the appeal, paid tribute to the Welsh firebrand, who died in 1945 shortly after being created Earl Lloyd-George of Dwyfor.

He said: “I am delighted to be speaking at the dinner and will ask the question if David Lloyd George is the father of modern Wales?

“It can be argued that the lowest point of his political career, before he entered Number 10, was in 1896 when his attempts to forge a nationwide nationalistic movement – Cymru Fydd or Young Wales – with Welsh Liberal forces ended in disaster at a public meeting in Newport.

“Up until this point he had been a forceful advocate for Welsh Home Rule and preached the virtues of small nations controlling their own destinies. He constantly attacked the British government for ignoring Welsh needs.

“After 1896, his interest in Welsh Home Rule evaporated as he developed a career on a British and global stage. But many of the themes he developed during his Cymru Fydd period have strong parallels today.

“Many of the weaknesses and needs of the Wales of a century ago are still with us today. He addressed them and saw the need for action.

“What he did provide during the Cymru Fydd period was strong leadership and a willingness to take his message to all parts of Wales.”

Huw, who presented the 2013 Criccieth Festival David Lloyd George Memorial Lecture under the title Rebranding the Firebrand, added: “Lloyd George is still a remarkably divisive figure a century after his arrival at Number 10.

“This was no mean feat for the man brought up in a rural Welsh village, with no significant financial means to sustain his career, no university education, and no ready-made public school network of friends in high places.

“It is intriguing to ponder where Lloyd George, the cottage-bred Welsh boy who became an ardent upholder of the British Empire, would stand on Brexit.

“Would he, like his great friend Winston Churchill, be an evangelist for the concept of the European family? And would he regard membership of the European Union as being essential or optional or undesirable?

“As we mark the centenary of one of the most radical and significant premierships of the twentieth century, these questions are certainly worth considering.”

Lloyd George’s grandsons Robin and Bengy Carey Evans, who are now in their 90s, also paid tribute to the man they knew as Taid.

Robin said: “I  heard him speak publicly on only one occasion, at the  Caernarfon National Eisteddfod.  He was magnificent – he had the whole assembly completely captivated hanging on every word and gesture. I have never heard anyone else master an audience like that.

“In 1945 I had been on leave from the RAF and went down to see him at Ty Newydd his last home in Llanystumdwy to say good bye. He was lying in bed very weak but he raised his head and took my hand and was just able to wish me a safe return to my squadron.

“He died that night.”

Bengy added: “If one was able to ask him now what he would like to be remembered for, it would I believe be the “other war” he waged from 1909 to 1912, the war against poverty and social injustice.

“This was a war he clearly won without any loss of life – in fact it gave life to millions of workers by awarding them for the first time a Government sponsored pension and ultimately a National Health Insurance scheme.

“This war was fought against a reluctant and at that time privileged and socially indifferent House of Lords. This helped to prevent violent class conflict in Britain and made it a more stable and united society in the succeeding decades.”

The dinner will raise funds to secure and develop the museum, which was ear-marked for closure by Gwynedd Council in a bid to balance its budget. Thanks to the intervention of then Chancellor George Osborne and Justice Minister Michael Gove, the museum won a stay of execution until April 2020.

Elizabeth George, Coordinator of the Lloyd George Centenary Appeal, said: “We know from current figures that to keep the museum running, as it is without any further development, requires a minimum of £55,000 per annum. This is without the investment and infrastructure costs required to set up the new Lloyd George Museum Trust.

“By making a donation, our supporters will be contributing to secure the future of this  national historical attraction which provides unique opportunities to promote the story of the extraordinary journey of David Lloyd George from the rural village of Llanystumdwy to 10 Downing Street and his influence on Wales, Britain and the world.”

• He was born as David George on January 17 1863 in Chorlton, Manchester. After his father William died, his mother Elizabeth moved the family to Llanystumdwy where they lived with her brother Richard Lloyd.

• A shoemaker, Nonconformist minister and Liberal activist, Richard Lloyd had a strong influence on the young David, who went on to study law, setting up in practice at the family home. He later expanded and took on his brother William.

• Lloyd George first made his legal name fighting for the right for Nonconformist believers to be interred with their own burial rites. He went to found monthly paper Udgorn Rhyddid (The Bugle of Freedom).

• On 24 January 1888 he married farmer’s daughter Margaret Owen, and they went on to have five children. He later controversially set up home with his daughter’s former governess Frances Stevenson, whom he married after his wife’s death.

• In April 1890 he became Liberal MP for the Caernarvon (corr) Boroughs by just 19 votes – a seat he would hold for 55 years, until shortly before his death at Ty Newydd.

• An opponent of the Boer War, in 1905 be became President of the Board of Trade and three years later Asquith made him Chancellor of the Exchequer.

• He was largely responsible for the introduction of state financial support for the sick and infirm, paid for by new taxes on land, drinks, tobacco and income.

• After the First World war broke out, he was appointed Minister of Munitions, putting through the conscription act, and then Secretary of State for War.

• In December 1916 he succeeded Asquith and became Prime Minister of a Coalition Government, allied with the Conservative Party.

• He led the Liberal-Coalition into victory at the December 1918 election, and remained as prime Minister until 1922, until he was succeeded by Bonar Law. During this time he oversaw the introduction of votes for women, extended men’s votes, introduced education reform, social housing, employment laws, and the creation of Northern Ireland in 1921.

• He was ousted after a fall-out over foreign policy, but became Leader of the Liberal party, and Father of Commons.

• He cast his last vote in the Commons on 18 February 1943 as one of the 121 MPs condemning the Government for its failure to back the Beveridge Report. Fittingly, his final vote was in defence of the welfare state which he had helped to create.

• On New Year’s Day 1945 he came Earl Lloyd-George of Dwyfor, Viscount Gwynedd, (custom dictated he add a hyphen to his double barrelled surname) but never took his seat, as he died of cancer soon after, on March 26, aged 82.

• He is buried alongside the Afon Dwyfor in Llanystumdwy, with his grave marked by a boulder and a monument designed by architect Sir Clough Williams-Ellis.  It bears an englyn composed by his nephew Dr William George.